On 20th March 2010, Eyjafjallajökull burst into life after nearly 190 years of inactivity. Up to that point, very few people outside of Iceland or the volcanological community had heard of Eyjafjallajökull, but this volcano has arguably had a greater global impact than any in Iceland since the huge Laki eruption of 1783, which resulted in short-term climate impacts in the Northern Hemisphere and the deaths of tens of thousands of people. The impacts of the Eyjafjallajökull eruption have been felt globally, with air travel severely disrupted due to worries about the damage that volcanic ash (tephra) can have on jet engines.

The initial eruption was on the eastern flanks of the volcano at Fimmvörduhals, producing basalt lava flows and spectacular lava fountains, but not much volcanic ash. Fljótshlíd residents noticed an orange glow on the edge of the volcano at 23:52 GMT. The initial eruption was in the Fimmvörduhals area, the pass between Eyjafjallajökull and Mýrdalsjökull, and produced alkali-olivine basaltic lava with an SiO2 content of around 47% according to the Institute of Earth Sciences/Nordic Volcanological Institute. Activity decreased over time until the fissure eruption stopped on the 12th April. Activity then switched to Eyjafjallajökull’s main crater in the early hours of 14th April. Activity finally peetered out in June 2010, with the last report from the Institute of Earth Sciences/Nordic Volcanological Institute on the 23rd June. The volcano has been quiet since then. Analyses of the tephra from the second phase of activity show a more evolved source, with an SiO2 content of around 58% with a high fluorine content.

Eyjafjallajökull is a 1.6km high stratovolcano on Iceland’s south coast, about 125km south-east of Reykjavík. The "jökull" part of the name refers to the ice cap which covers the volcano’s summit. A 2.5km wide crater is found at the summit, from which a glacier, Gígjökull (crater glacier), flows northwards down the slopes of the volcano. It is probably one of the oldest active volcanoes in Iceland, and first began to erupt about 800,000 years ago. Whilst other Icelandic volcanoes such as Hekla, Katla and Grímsvötn have been active frequently over the last thousand years, Eyjafjallajökull has erupted on only three previous occasions since 9th century Norse settlers arrived in Iceland: in 920, in 1612, and in 1821-23. Its eruptions are actually relatively small, around ten times smaller than the 1980 eruption of Mount St Helens. 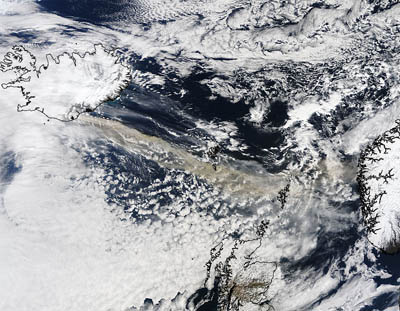 After several weeks of relatively mild fissure activity in the Fimmvörduhals area, which resulted in lava flows and scoria cone creation, the main crater of Eyjafjallajökull began erupting early on the 14 April. This subglacial eruption has resulted in several jökulhlaups (large floods of melted ice) which have flowed north out of Gígjökull into the Markarfljót valley. The flood waters have flooded farmland and some properties, as well as damaging roads and bridges. In preparation holes were made in the Route 1 embankments in an effort to save the main road bridge across the Markarfljót. Further flooding can be expected as long as the eruption is melting ice in Eyjafjallajökull's main crater. Although Eyjafjallajökull continued to pump ash into the atmosphere, much of Europe's airspace was reopened on 20 April. This largely reflected a change in the regulators' view on the tolerance of jet engines to low concentrations of tephra. The eruption has varied considerable over the next week, with a lava flow extending northwards beneath Gígjökull. This contributed to continued meltwater being created. The explosivity of the eruption also varied, with an increase in plume height to around 9 km reported by Institute of Earth Sciences/Nordic Volcanological Institute on the 6th May. Winds were carrying the tephra to the south of Iceland.

The large amounts of tephra being produced by the eruption were a result of the interaction between the lava and the glacier which overlies the volcano. The erupting magma melts the overlying ice, creating steam, and it is the rapid explosive expansion of the ice to steam which literally blows the molten lava into fine ash fragments (very similar to what happens if you pour water onto an oil fire). This type of activity (phreatomagmatic) is typical of Iceland's subglcial volcanoes and is responsible for Iceland having a fantastic record of past eruptions in its soils. This is why Iceland is probably the best place in the world to use tephrochronology (use of tephra layers for dating).

The MODIS Terra satellite images to the left show the clear reduction in the intensity of the plume between Monday 19th April and Tuesday 20th April. Tephra was still being produced, but in much lower quantities. This is one of the reasons for the reopening of Europes airspace, as well as the new safety threshold for tephra concentrations.

On the 23 May, the Institute of Earth Sciences/Nordic Volcanological Institute reported that the volcano was dormant and just emitting steam. However, the Institute of Earth Sciences/Nordic Volcanological Institute report of the 7 June described renewed small scale activity with some local tephra production and a plume of mainly steam reaching an altitude of 4.5 km on the 4th June. The final report on the 23rd June 2010, describes small scale ash clouds and that the ice is no longer in contact with molton material. Since June 2010, Eyjafjallajökull has been quiet.

The Institute of Earth Sciences/Nordic Volcanological Institute reported that 100 million m3 of tephra had been erupted. Whilst this might seem like a large quantity, and it certainly has disrupted a lot of peoples' lives, it is a modest eruption.

Further details on the eruption can be found via these web links: